Last week I spent two days in Toronto attending the yearly Fanexpo convention. I had been many times to that and other Anime cons as a young Dalek growing up in Toronto. But last year was the first time I attended the new incarnation which sprawls across the entire north and south section of Toronto’s huge convention centre.

It was the last weekend of summer and there were lots of other events in town but the local media loved covering thousands of nerds who had descended on the city. More like come out into the light. We’re always there, normals, lurking behind you, in that board game café, on a laptop in that coffee shop. We’re everywhere and it feels wonderful to be there where you know everyone else is obsessed with something as you are.

So here’s my photo diary of the highlights.

Warning: there are one or two spoilery hints ahead from Doctor Who actors. Nothing definitive, but hints.### Professor River Song…Archeologist

Alex Kingston was as wonderful as I had hoped and feared. A truly formidable enemy for any dalek, even without a Moffat script to back her up. So I decided not to attack. Her Q&A session was hilarious and full of poignant life advice.

Some shots from around the floor. Along the bridge from South hall to North hall. Lots of signature booths as you can see. In the zoom shot you might make out the line of empty booths where Nichelle Nichols, Brent Spiner, William Shatner, George Takai an others were going to be. To left of them is the Great Christopher Lloyd signing away. 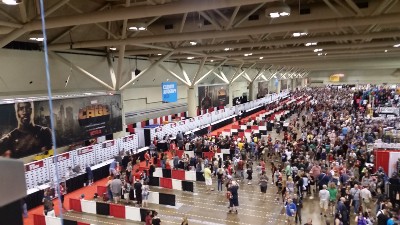 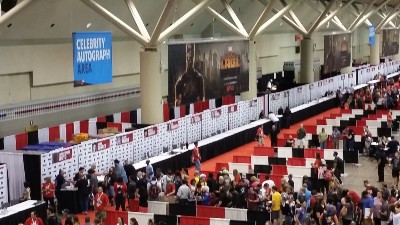 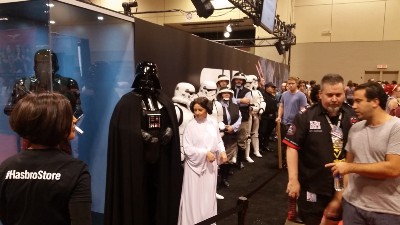 (left) View from bridge from North to South Halls. (right) Even Vader and Leai have to wait in line for the Hasbro store.Space channel is a major part of the show from my point of view. The Innerspace hosts run most of the Q&A’s for SciFi stuff and their booth had a daily Doctor Who trivia competition. Morgan from Innerspace even has a mini-Morgan cosplaying her. She was there last year too. They’re twitter friends.

Once, long ago @Canadalek and @aditheadipose met in real space, whole worlds were laid to waste. Ahh, those were the days. That was last Friday. Long shall it be sung of in tales of war. 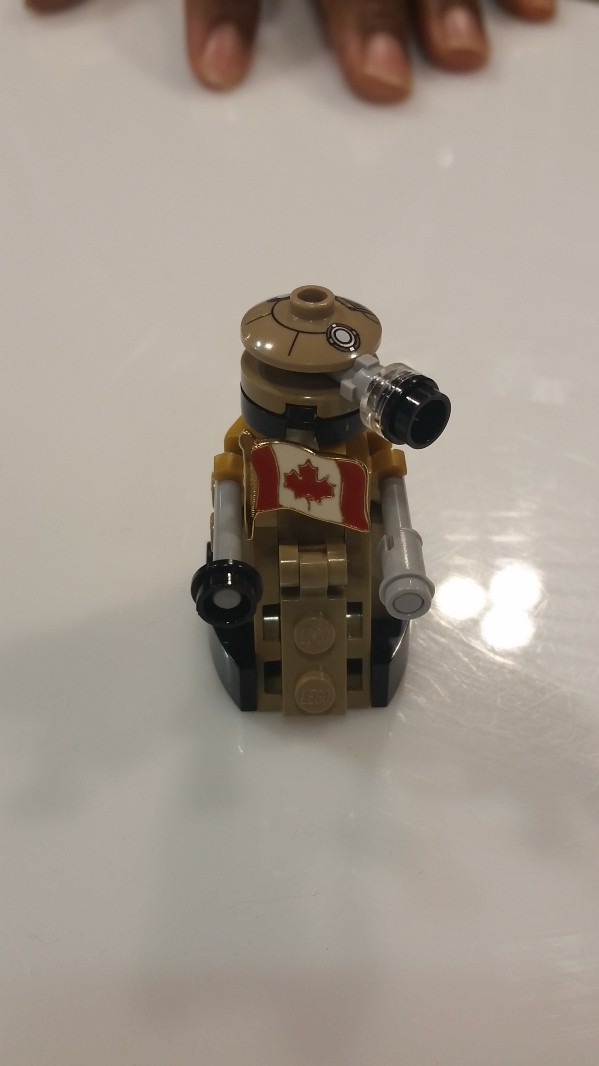 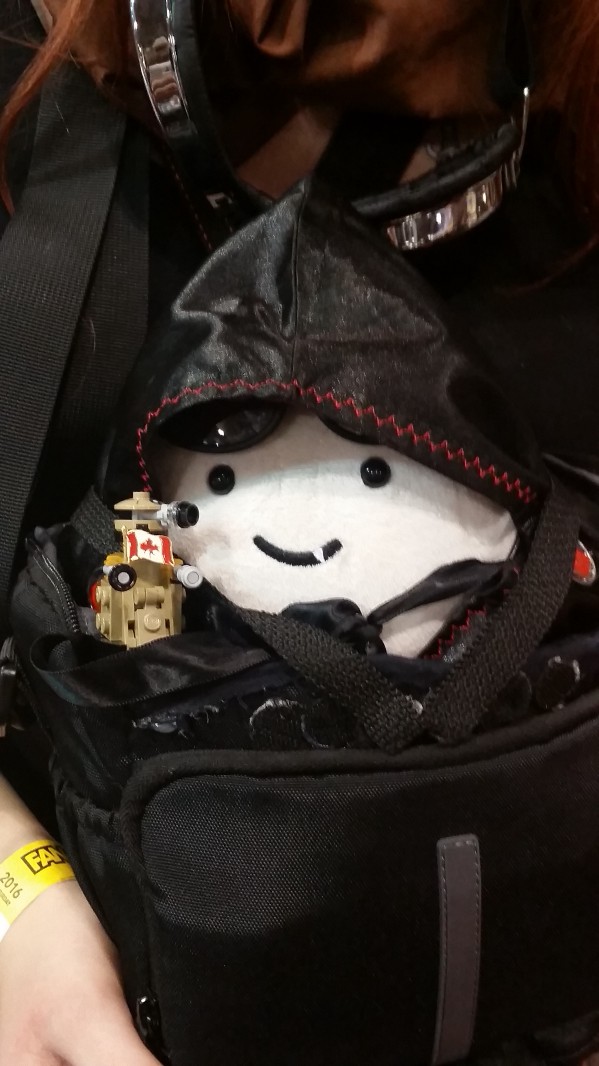 Hanging out with my friend Adi.### The Shatner

A fascinating creature. The Shatner does not require a host for his panel, just a microphone and lights. When asked a question, he will begin speaking about something vaguely related, for 5 or 10 minutes. When he is done he will say “Does that answer your question?” It is best to say “yes” and return to your seat when this occurs. Whatever you do, do not, I repeat, do not ask the Shatner what his favourite TOS episode is. Even though Stephen Hawking asked him the same thing, he will berate you for it endless. He will then say “The tribbles one I guess, does that answer your question?” 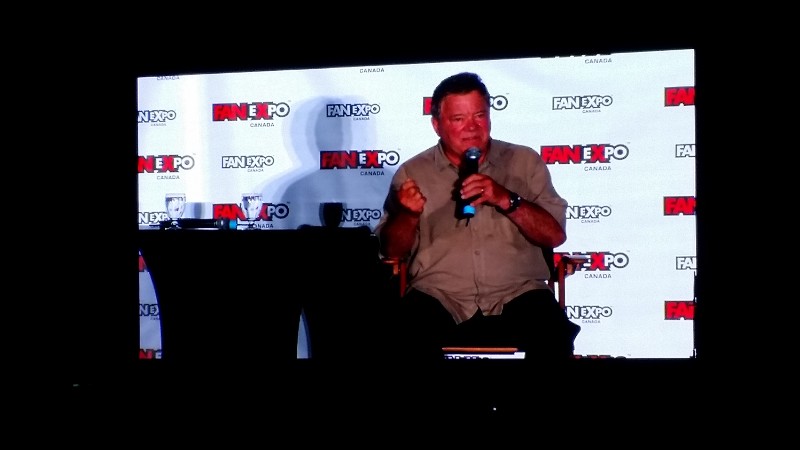 He was lots of fun. Like a crazy old uncle telling stories, but very nice, not truly mean to anyone.

A hilarious panel with Michelle Gomez a.k.a. Missy.

**Should the Doctor regenerate as a woman? **Yes! Gender, what does it all mean anymore? Who cares? It’s about time, dooou it! (again, paraphrasing)

Sometimes someone will be hestitating to ask a question and she’ll be like “Go on then” just like Missy before she vapourizes you. I love her.

Moffat: Old friend, he knows how she thinks and talks. He writes it all for her voice.

Casting: She was originally cast to be the Mother Superior in the Adipose episode. I know! She couldn’t make it then felt horrible because she’s been a huge fan all her life. But later they found this part for her and just asked her to do it. Her agent: “You may need to sit down for this”. She looooves the role. It’s her perfect role.

**On coming back next season: **Oh she’s coming back. I guess we knew that. But in terms of what she’ll be doing? Remember her last line?

“Oh, I just had a very clever idea.”Michelle says it’s about that. What was her idea? I don’t know, do you?

Many of my brothers and sisters were there, entertaining children, levitating, raising funds for Dalek orphans. If I had a heart rather than a cold bit of darkness, it would be warmed. 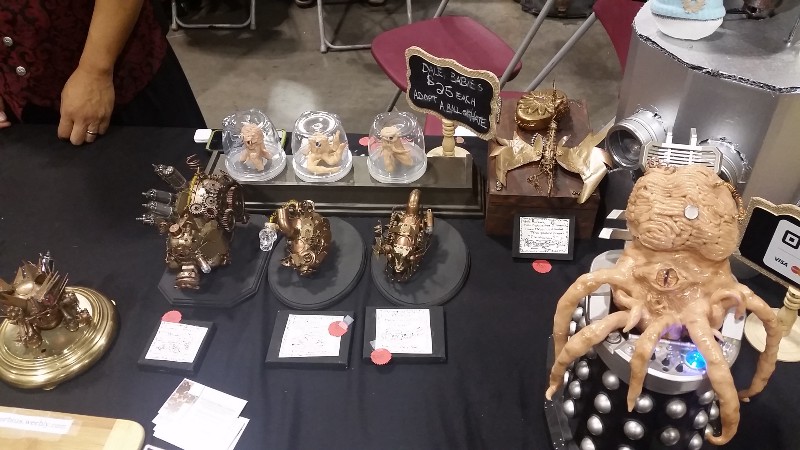 I also have a hilarious video of Dalek Fred waiting for an elevator like a Sontaron because it was full. Pitiful, I’ll have to figure out youtube first though.

I saw the John Barrowman panel as well. Which, like The Shatner, was just him and a mike rambling on from questions. But it was 8000 times dirtier. Hillarious, but dirty. That’s all I’ll say.

Torchwood or anything : he waaants it to come back. They are doing books and comics, him and his sister? But the show he would love to come back. He implied Moffat had decided it wasn’t right. He did not indicate he’d be back for christmas special. But hey, maybe he’s just acting.

Can you imagine River and Captain Jack getting together? What would the Doctor do? — John Barrowan### And Margaret Atwood 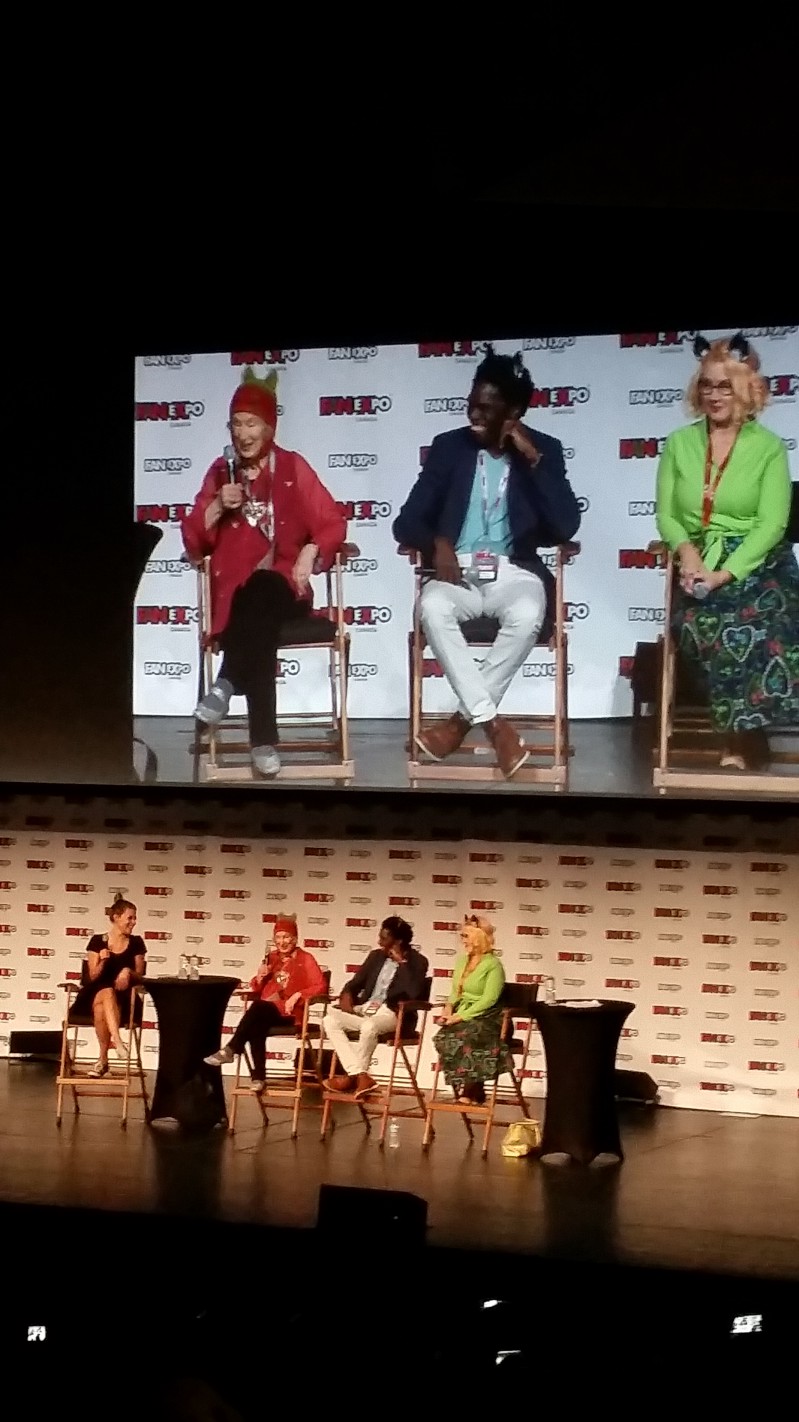 Oh, and she wore cat ears. Which is amazing.Anyways, she has a new graphic novel that she wrote and worked with an artist to draw. It’s called Angel Catbird and it’s trying to raise awareness about how cats spend their lives exterminating rare birds so you should keep them in your house or else Angle Catbird will come and attack you. Or something, I don’t know, I haven’t read my signed copy yet. :p

I can’t even write down right now how awesome the Q&A with Kate Mulgrew was. After the first few questions she basically ran it on her own. She was like William Shatner but with more class and restraint and wisdom. She loves Orange is the New Black and her character on it. But she says that is easy compared to Voyager. She cherishes the years on Voyager but it was the hardest thing she ever did because she had to be the adult in the room, to carry the show in many ways. She talked about how hard it is to be a woman in Hollywood. But she loved doing that show and she really believes in the principles of Star Trek. 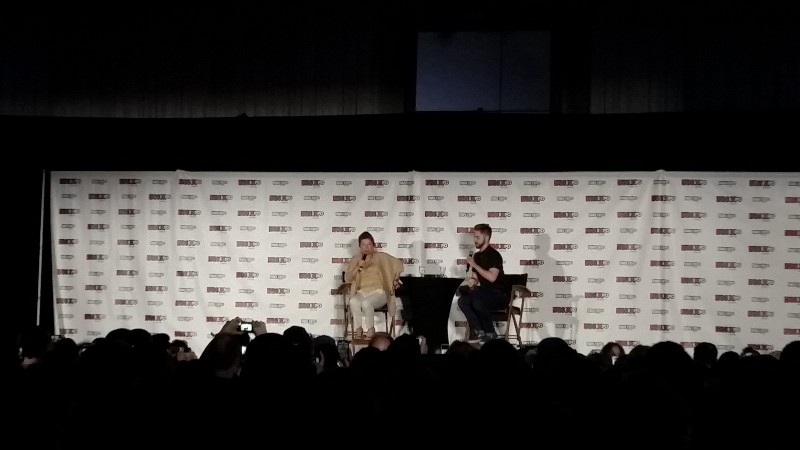 Janeway’s secret motivation: she could never, ever, tell her crew that she actually was thrilled to be stuck in the Delta quadrant in the sense that she’d be able to explore a new place no human had ever seen. The challenge of it was exciting to her. So there, B’Elana was right. :)

Last but not least at all, like *at all, *was Freema Agyemen a.k.a Martha Jones. She had a lot of fun with the crowd and tried to remember way back to season three of Doctor Who. But she also talked about her time on Law and Order UK and her new show Sense8 which sound amazing actually. The Matrix was pivotel in her life at a time of religious questioning so to be working with the Wachowskis on a show like this is her dream come true. 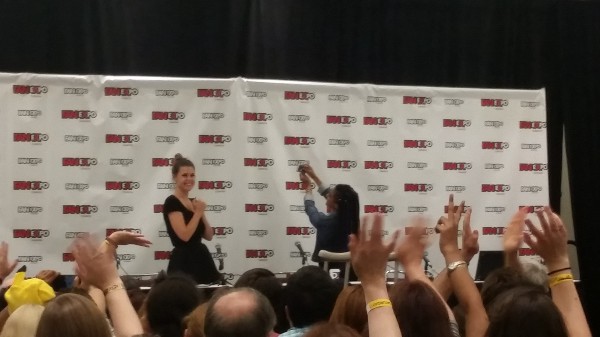 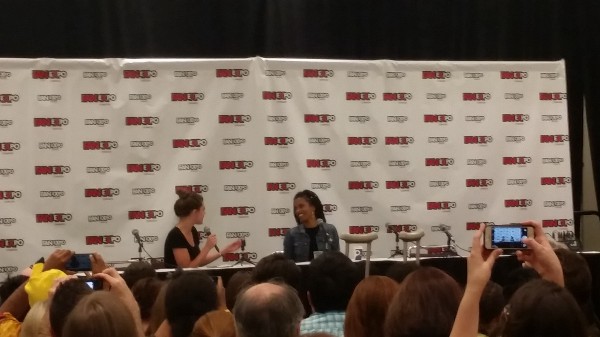 Right to the selfie, no hesitation. And that smile. Great interview.The clone rises: that scene where Martha is cloned and her auton arises out of a vat of goop. That was done in one take. She was terrified she’d have to do it over and over. It was horrible and she couldn’t hear or see anything.